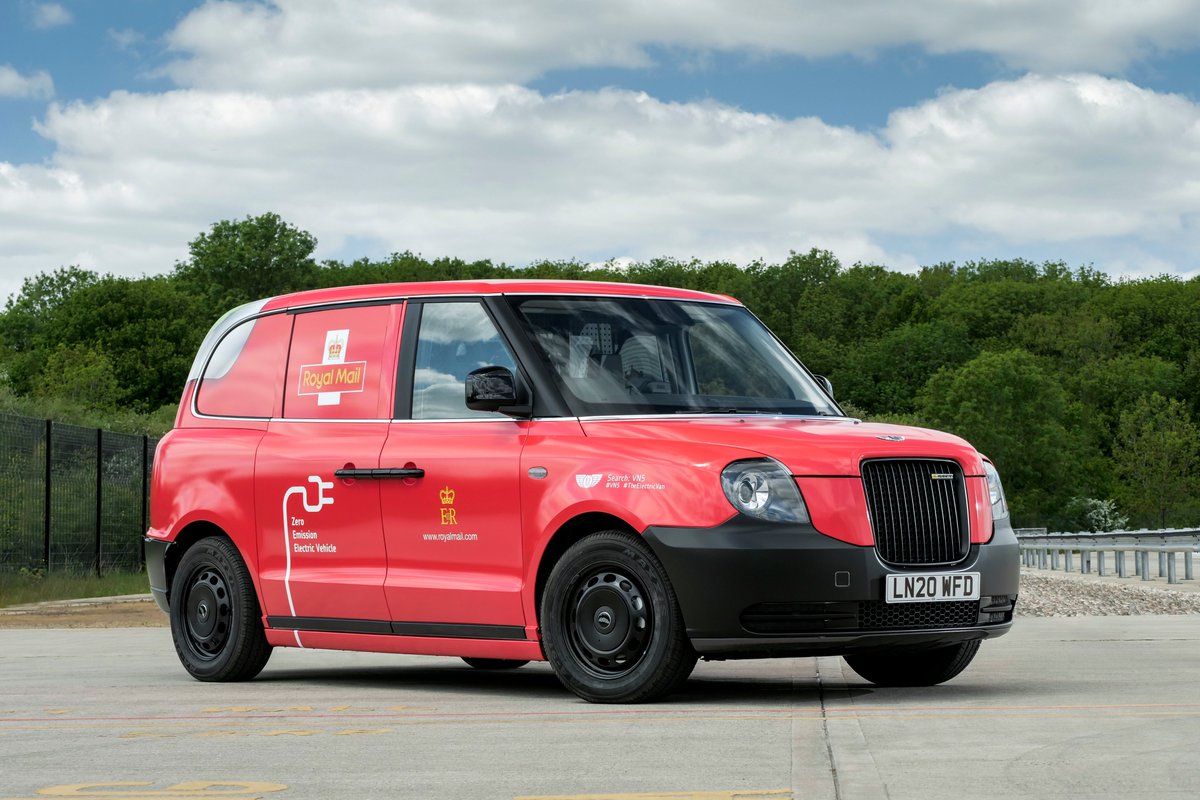 One van will be trialled on delivery rounds in largely urban areas over the next six months, including locations in Derby, Leeds, Edinburgh and Bristol. The trial begins this week in Hockley, near Birmingham.

The 2.9 tonne van is designed to operate at lengthy distances on a stop and start basis, comparable to a typical postal round. Fully chargeable at the local delivery office, the van is designed to help postmen and women deliver letters and parcels securely, whilst reducing associated emissions.

The coronavirus pandemic has caused disruption in many industries, including automotive. Unable to financing in this climate, China-based startup automaker Byton has had to put its activities on hold until better times.

Paul A. Eisenstein » The Detroit Bureau »

Once-promising battery-car start-up Byton is suspending operations for the next six months, but the prospects for the company then being able to get back to business seem slim, according to sources both inside and outside the company.

Best known for the 48-inch video display topping the instrument panel of its M-Byte SUV, Byton seemed poised for success as recently as last winter, the company showing off a production version of the electric-ute at the 2020 Consumer Electronics Show in Las Vegas. Byton had completed its assembly plant and China and even won the coveted license from government regulators needed to go into production. But then the coronavirus pandemic struck and, as the Chinese market was forced into lockdown, things turned south.

In April, the automaker confirmed it would furlough about half of the 450 employees at its U.S. operations. Now, virtually all staff around the world will be let go, spokesman Dave Buchko told TheDetroitBureau.com Monday afternoon.

Other promising newcomers that appear to be in financial difficulty include Nio and Faraday Future.

There was a lot of talk, a lot of pomp, but little else at the unveiling of a working prototype of the Lordstown Endurance pickup truck.

After the 45 minutes of speeches and a short video of an empty factory, the prototype Endurance was driven on stage by US Vice President Mike Pence, who then gave a half-hour speech highlighting the Trump administration’s accomplishments.

At a curiously political event, the EV maker showed its vaguely futuristic-looking truck but didn’t give much new information about it.

On Thursday, Lordstown Motors Corporation revealed its first vehicle set for assembly at its Lordstown, Ohio factory, a plant previously owned by General Motors. The startup has high hopes to revitalize the Mahoning Valley, where GM once cranked out hundreds of thousands of cars.

The event, held at the plant the company purchased from General Motors and featured an appearance by Vice President Mike Pence, was a red, white and blue affair with the truck rolling onto the stage in front of a large American flag.

Burns will be in a fight with Tesla, which is accelerating the production timeframe for its uniquely styled Cybertruck – which also has at least 250,000 reservations in hand, and others like Rivian and Nikola on the “underdog” front as well as the aforementioned GM, which plans to have its GMC Hummer and its eye-popping performance stats, and Ford’s electric F-Series all out in the market in the next 18 to 24 months.

We are told the Lordstown Endurance will sell for a US$52,000, have 4 in-wheel motors, and a range of 250 miles. Additional specs such as power, towing, and payload were not made available.

The first customer deliveries are scheduled for January 2021. It will be impressive if the Lordstown Endurance makes it to market by 2021 at all.

More » The Verge » Lordstown Motors unveils the Endurance electric truck, and not much else

END_OF_DOCUMENT_TOKEN_TO_BE_REPLACED

The firm’s CEO Graham MacDonald said the cost of developing a bespoke electric drivetrain is too high for a company of Caterham’s size, and that electric motors’ driving characteristics don’t suit its most renowned model, the Seven roadster (above). He explained: “Currently, we think an all-electric powertrain would add more than 300kg to what is, already, about a 500kg car.”

“We recognise that the future is electrification but, as you know, we use main-brand engines. So we’ve used the Suzuki engine, we use the Ford engines just now – so we wouldn’t be naïve enough to think we could develop our own EV powertrain; we’d be looking to use an off-the-shelf package,” he said.

More in the full article »

Rimac revealed the C_Two at Geneva motor show in March 2018. Shortly after, head of sales Kreso Coric told Autocar that the production model was close to being sold out, with nearly all 150 examples already spoken for.

The final production car was due to be revealed at Geneva motor show in March, but following the cancellation of the show due to coronavirus, Rimac has now confirmed that the final model and official name will be announced later this year.

150 examples of the £1.7 million Pininfarina Battista hypercar will be made » using a 1900bhp Rimac powertrain.

The new boss of luxury EV maker Automobili Pininfarina has told Autocar that the 1900bhp Battista hypercar is on course to reach customers this year – and said that new technology partnerships will accelerate the firm’s subsequent plans.

Automobili Pininfarina plans to produce 150 examples of the £1.7 million Battista, which uses a Rimac powertrain, and Svantesson said that a key focus of the new management team is “getting the design into the hands of customers”.

He added: “Producing high-performance cars like this requires complete attention to detail. It’s one thing making a beautiful design, but we need to promise a lot to customers and then keep that promise through ownership.”

The Germany-based company Elektron Innovativ is behind the Elektron One, and it intends to build the vehicle in Italy’s Motor Valley area, which is near the workshops for brands like Ferrari, Lamborghini, and Pagani. The fledgling automaker is also working to form a Formula E team called Scuderia-E. Elektron Innovativ wants the knowledge from motorsport development to influence the hypercar.

A gasoline engine up front, a transmission in the middle, and a fuel tank in back: For decades, that’s the way most automobiles were designed.

Electricity has changed that equation. And the Bollinger B1 sport-utility and B2 pickup are among the new electric vehicles (EVs) that show car designers are taking full advantage of the freedoms afforded by electric propulsion.

The result is unprecedented cargo-carrying versatility: The cargo beds of most “full-size” pickup trucks are just 1.8 meters (or 6 feet) long, with the longest beds limited to 2.4 m. But the Bollinger B2 can swallow cargo up to 4.9 meters long—lumber, ladders, poles, gutters, whatever—that extends from the truck’s blunt nose all the way to the back of its tailgate.

Aiways is now supplying the car rental company Filippi Auto in Corsica with several hundred units of its battery-electric SUV U5 as part of the Electrify Corsica project. Filippi Auto is Aiways’ first major customer in Europe.

The Corsican client is the operator of the Hertz car rental companies on the Mediterranean island. The Chinese BEV fleet is to be integrated into the company’s fleet of cars as early as this summer, according to a press release electrivereceived by email. The procurement project is part of a large-scale campaign to reduce emissions and air pollution in Corsica and to make the island a hub for e-mobility.

The vehicles – all U5 crossovers – will be used for leasing on the island in the Mediterranean Sea, the company said.

The U5 – about the size of an Audi Q5 – is Aiways’ first product and is equipped with a 140-kilowatt electric motor, with a range of more than 400 kilometers.

Prices start at just £6,400+VAT (~ US$7870.) for the 80kW (107bhp) motor, transmission, and differential with options for cooling, inverters, and limited slip differential also available.

Deliveries to the first customers will commence in August 2020.

“Really we started the design two years ago. We saw an opportunity in the market: if you’re a car manufacturer and you want to make 10,000 or 100,000 [electric] vehicles a year, there are plenty of suppliers to talk to. If you want to do an electric vehicle and you’re looking at a dozen, a hundred or even a thousand a year, there was nobody to talk to until now.

“This is definitely the only EV powertrain that you will be able to buy online from a website, with a credit card, on a one-by-one basis.”

And yes, you will be able to buy and ship one of these to the United States. Swindon says it can ship directly to U.S. customers — you’ll be able to choose whether you want the 60-kg package (the powertrain itself weighs 49 kg) to come to you by air or by sea.

Swindon Powertrain sees its primary use coming from electric conversions of sports cars, classic cars, small commercial vehicles and recreational vehicles such as golf buggies. The powertrain has flexibility for a variety of uses through having different installation points and two inverter options.